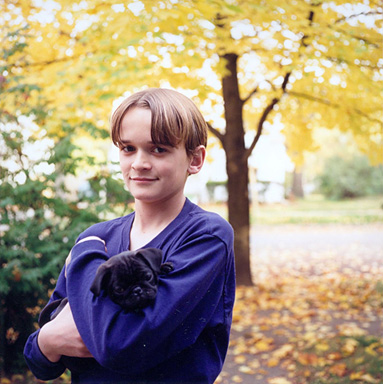 Gabriel asked for a dog several times when he was a little boy. But we didn’t want to get a dog. “Too much trouble,” we said. “Who needs a dog? Neither of us had a dog when we were growing up and we turned out fine.” Gabriel had to be content with a stuffed animal, a red bulldog that he called Brutus, which he won at a fair in Michigan.

But after Gabriel tore his ACL at the age of eleven in a senseless accident and couldn’t play sports anymore, David and I decided we should get a dog.

Gabriel wanted a bulldog. But I had learned that pugs were very cute while visiting my friend Rosa in Los Angeles. Rosa had two pugs, an old pug and a young pug. I convinced Gabriel that pugs had the most adorable squished faces of any dog in the world.

We found out through an ad in the newspaper that a nurse who raised pugs in Michigan was selling the litter. We went to have a look. Gabriel picked out the dog that was not too shy and not too outgoing. He was all black, not faun-colored like all the others. He seemed happy to go home with us.

He became our Brutus, a living dog, not a stuffed animal.

Brutus completed a course in Kindergarten Puppy Training. That was education enough. If he felt like it, he sat when you asked. He perked up at the word “treat.”

Brutus was a comfort to Gabriel during his two knee surgeries. He slept next to Gabriel and watched over him until he healed.

As a young dog, Brutus was a dandy. At parties Brutus jumped into the laps of all the women present, flattering the ladies with his attention. 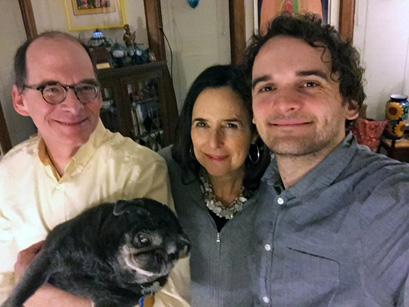 Brutus knew he was a Jewish dog. During his heyday, he was well aware when it was Shabbat. I lit candles on Friday night and David, Gabriel, and I would share a delicious braided challah that David baked every week (this was before David discovered he had a gluten allergy). As soon as Brutus saw the candles blazing and smelled the bread, he’d ask for his piece of challah and mutter a prayer of thanks.

I took Brutus out for the occasional walk. Now and then I fed him or gave him a treat. But he became David’s dog. After Gabriel left to go to college in New York, I began to travel a lot. I was in and out. Brutus would watch as I packed my suitcase. It was a relief to know Brutus was there to take care of David when I was away.

As the years passed, I spent less and less time with Brutus. He didn’t expect much of me. When we were home together, he’d wait by the door for David to return.

Brutus was a lap dog for most of his life. As he grew older, he became a loner. By the end, Brutus was blind and deaf. He had arthritis and a big ball of cancer on the right side of his face. He forgot how to bark. He was almost seventeen… ancient in dog years.

Today was a beautiful spring day, the forsythia blooming bright yellow. Brutus stood outside in the sun for a few minutes, not moving, just waiting. He seemed lost, confused. Perhaps he knew it was the last time he’d feel the sun’s warmth.

When David brought Brutus back inside, Brutus began panting and gasping for breath and walking around in circles.

At the animal hospital, they gave Brutus oxygen. Brutus could breathe again, but his heart was failing. The vet said it was maybe time to let him go.

David and I crouched on the floor next to Brutus as he crossed over to the other side. We stroked him, told him, “You were a good dog, Brutus, such a good dog.”

The vet said they could make a print of Brutus’s paw, in plaster or in ink, as a souvenir.

We had not expected Brutus to die today. David and I fell into each other’s arms and sobbed like orphans. We’d lost our sweet little pug, the only dog either of us ever had.

Bridges to/From Cuba, is a bilingual blog featuring true stories from and about Cuba by Ruth Behar and Richard Blanco
Wanderer, There is No Road: Remembering Juan Roura-Parella and the Lovely T...Poetry & Friendship
Scroll to top