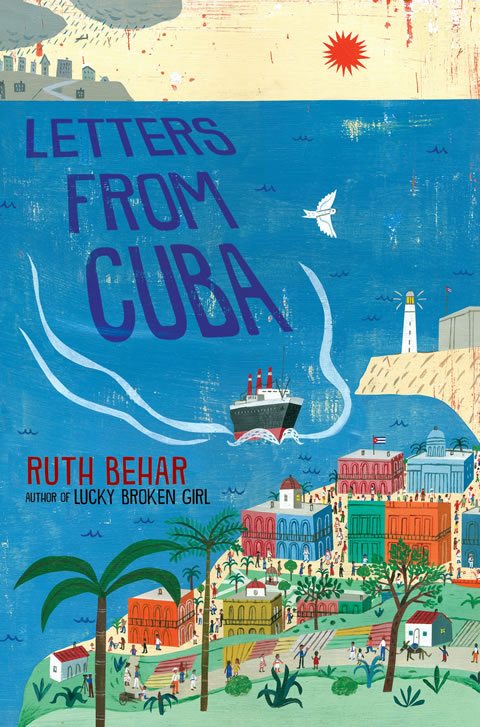 Pura Belpré Award Winner Ruth Behar’s inspiring story of a young Jewish girl who flees Poland on the eve of WWII and makes a new life for herself in Cuba, while she works to rescue the rest of her family, is based on Ruth’s family history.

Things have gotten dire for Esther’s family in Poland as discrimination against Jews has intensified. With the family store shuttered, her father has fled to Cuba to work to bring his family over, and now Esther’s made sure she’s the first child to join him.

Being separated from her beloved sister is heart-wrenching, but Esther promises to write everything down that happens until they’re reunited. And many good things do happen. First of all, the Cuban people are welcoming and treat her with dignity. Then she chances upon a way to make more money than her peddler father could dream of when she discovers her talent for making lightweight dresses. All of a sudden there is a demand for her designs, and it looks like they will soon be able to afford to bring the family over. But it turns out not everyone is pleased with her success and there are pockets of anti-Semitism in Cuba too. Now it’s a race to get her family out of Poland and into Cuba before it’s too late, and to see if there is a way to stop the hate from spreading through Cuba too.

The Official Book Trailer for Letters from Cuba

Praise for Letters From Cuba

Readers will not want to part with this story of resilience. A World War II refugee tale that spotlights dedicated hard work. A must-have for-libraries.
★ School Library Journal, starred review

For me, Esther’s sewing was the real drawing point; I was making my own clothes at the same age, and seeing Esther’s abilities be the driving force in bringing her family to Cuba was a great story of empowerment. Strength in the face of adversity always makes for a compelling story. I loved this one.
–Ms. Yingling Reads

A wonderful window into a life we don’t often read about.
–The Children’s War

This is an openly loving tribute to the author’s grandmother, who made the real journey that inspired Esther’s fictional one.
– New York Times (August 30, 2020)

Inspired by her own grandmother’s life, Behar (Lucky Broken Girl) crafts a series of loving letters from Esther to her sister, describing the perilous journey and Esther’s first year in Cuba. . . . Global issues such as Hitler’s rise, anti-Semitism, slavery, and worker protests are neatly woven into Esther’s narrative. . . . Behar’s appreciative descriptions of Cuba and Esther’s close, protective bonds with her father and sister make for an engaging read.
–Publishers Weekly

Behar’s lyrical descriptions of Cuba and her perspective as a professional cultural anthropologist, form a rich background to Esther’s story.
–Jewish Book Council

Need to take a trip without getting on a plane or even in a car? This book is perfect then. Find Letters from Cuba today, cozy up in your favorite reading spot and bon voyage.
–Librarian Leaps

This book has the potential to help readers develop empathy for both the immigrant struggle and dangerous implications of hate.
– Latinxs in Kid Lit

Esther’s tale is one of adaptation and perseverance as she pursues dressmaking while also fighting for her rights and for peace in her new home.
– Booklist

May every person that reads it, grow to understand the hardships of those that seek refuge and share kindness with all people.
– Mrs. VanNostrand, Michigan Educator and Diverse Books Advocate

Will reaffirm your faith in humanity.
– Alan Gratz, author of Refugee

Ruth is a member of:

Though my new middle-grade novel takes place in the Cuban countryside in the late 1930s, Letters from Cuba is my heart’s response to the current news of deportations, immigrant travel bans, and international refugee crises. How, I wondered, could I talk back to the cruel anti-immigrant climate of our era? It occurred to me that by setting my novel in another time and place, I could offer a fresh perspective on how we think about immigrants, especially immigrant children. Because seeing immigrant children in cages hurts us all.

I can’t help but be passionate about this subject. I was once an immigrant child from Cuba, and I won’t ever forget that. We came to the United States at a time when Cuban immigrants were welcomed because we were fleeing the autocratic rule of Fidel Castro. Unlike my parents, I learned English when I was young, so I don’t have any trace of a Cuban accent. But I vividly recall how strange and frightening everything seemed when we first arrived. It took constant effort to get the cues right that allowed you to fit in and not be seen as totally “other.”

Being an immigrant once is hard enough. Imagine, then, being an immigrant twice over. That’s what all four of my grandparents experienced. They left Europe for Cuba in the 1920s and 1930s, as poverty, discrimination, and rising anti-Semitism created an unbearable situation for Jews on the eve of World War II. My grandparents created a new life for themselves on a tropical island, expecting to stay forever, but then, in the 1960s, they had to leave their beloved Cuba after the sudden turn to communism erased everything they’d worked for. They resettled in New York, where they worked again to build a new life. They crossed from América to America. 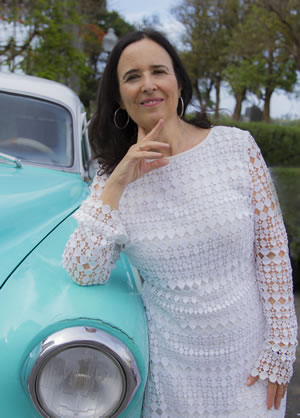 Ruth Behar is an award-winning author exploring the human fragility we all share.

As a storyteller, traveler, memoirist, poet, teacher, and public speaker, Ruth Behar is acclaimed for the compassion she brings to her quest to understand the depth of the human experience. She made her fiction debut with her Pura Belpré Award-Winning novel, Lucky Broken Girl, which explores how the worst of wounds can teach a child a lesson about the fragile, precious beauty of life. Born in Havana, Cuba, she grew up in New York, and has also lived in Spain and Mexico. Her memoirs, An Island Called Home and Traveling Heavy, and her bilingual poetry book, Everything I Kept/Todo lo que guardé, examine her return journeys to Cuba and her search for home as an immigrant and a traveler. She was the first Latina to win a MacArthur “Genius” Grant, and her honors also include a John Simon Guggenheim Fellowship, a Distinguished Alumna Award from Wesleyan University, an honorary doctorate in Humane Letters from Hebrew Union College, and being named a “Great Immigrant” by the Carnegie Corporation. She is an anthropology professor at the University of Michigan and lives in Ann Arbor, Michigan.